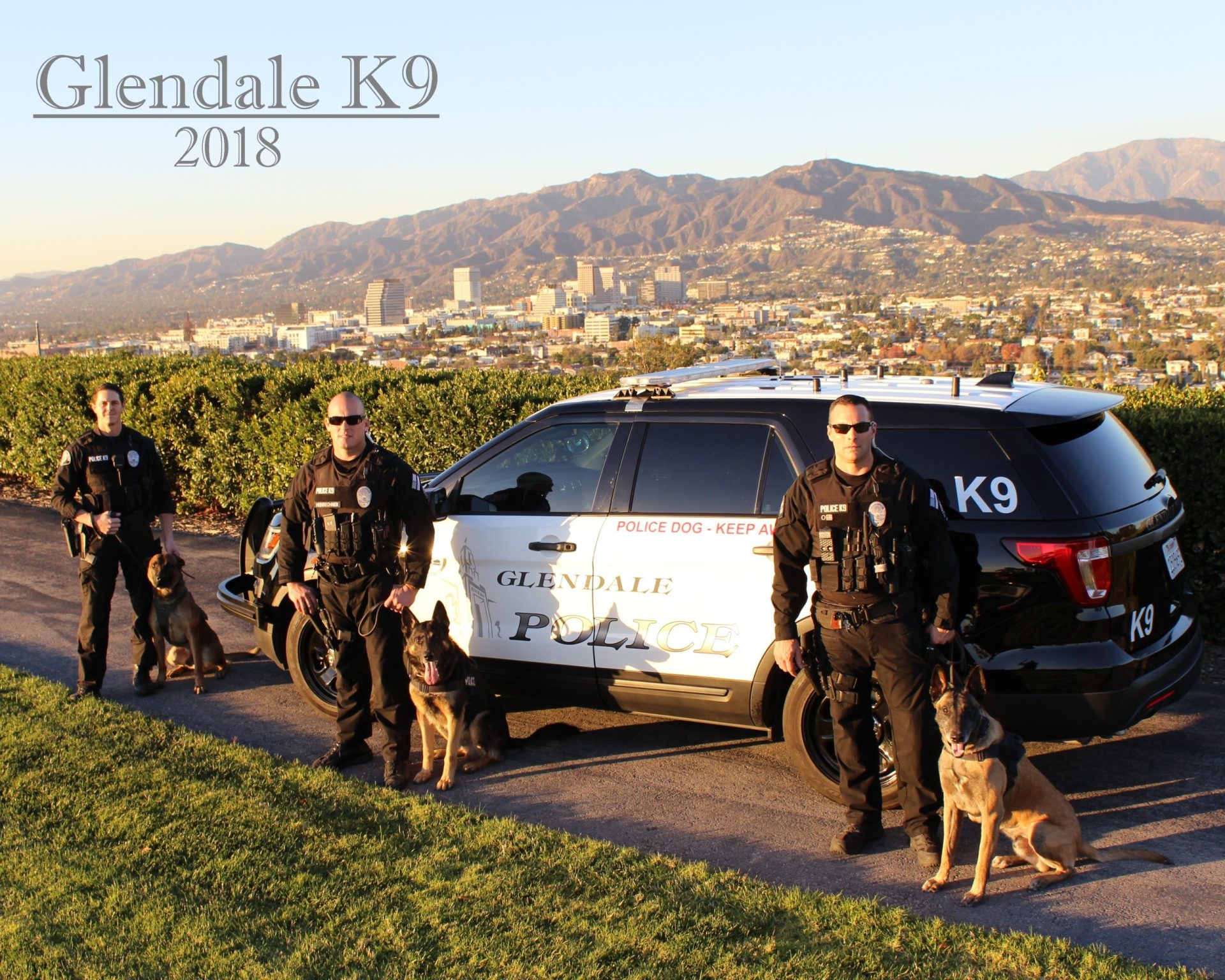 2018 was a very busy and productive year for Glendale’s K9 Unit!  The unit, which is currently comprised of 3 dual-purpose dogs and one single-purpose narcotics dog, was deployed in 105 incidents in 2018, which led to the arrest of 76 criminals!

With the unexpected retirement of K9 Duke came the welcoming of the unit’s newest recruit- K9 Eddie.  A back injury took Duke out of service life, but after corrective surgery paid for by a private donor, he is enjoying his retirement at home in comfort with his handler, Officer Matt Wilson.  During the three months of 2018 prior to his retirement, K9 Duke was involved in ten deployments in search of suspects and narcotics.

These deployments led to the arrest of 9 criminals.  Ofc. Wilson and his new K9, Eddie, graduated from school in July of 2018.  Eddie is a 3 year-old Belgian Malinois from the Netherlands.  He is currently certified as a patrol dog, and is in the process of being cross-trained in narcotics detection.  In just 5 months of his rookie year, Eddie had fifteen deployments and was involved in the search and arrest of thirteen violent criminals.

Guns, Drugs, and Bad Guys Taken Off the Streets by Glendale K9s

The use of K9s in law enforcement drastically increases the efficiency and safety of tasks performed by their human partners.  A K9’s incredible sense of smell allows it to locate drugs, guns, explosives, and suspects who might otherwise be undetected by human officers.  Furthermore, allowing a K9 to work ahead of a search team will give the human officers the tactical advantage of time and distance when an armed or otherwise dangerous suspect is located by the dog.  The following deployments are examples of how our dogs kept Glendale and our police officers safe in 2018:

A busy 2018 is leading right into a busy 2019!  This month, the Glendale K9 Unit assisted in the arrest of 3 suspects who broke into a business and removed the safe.  One suspect was immediately captured by the officers who observed the crime as it occurred.  The other two suspects fled into the darkness of the night.  Six neighborhood blocks were placed on lock down while the dogs searched systematically, yard-by-yard, for the two outstanding suspects.  After a four-hour search, both suspects were located blocks away from each other by Glendale K9 search teams and surrendered peacefully to officers.

The Glendale K9 Unit Continues to be Funded by the Community

Since the inception of the Glendale K9 Unit in 2005, all the costs associated with the purchase of dogs, equipment, training, vet care, and other associated supplies and services are funded through the generous donations from members of the community, as well as fundraising events.  All donations are tax deductible and routed through the Glendale Police Foundation, a 501(c)3 organization.  Please visit www.gpf.org for more information about donating to the K9 Unit or sponsoring upcoming fundraising events

In 2018, the cost of the K9 program totaled $57,295, which included the purchase of K9 Eddie, back surgery for K9 Duke, other veterinarian services, equipment, training, boarding, and other supplies and services associated with the K9 unit.   Because of the generosity of our community, these costs were covered through donations and fundraising.  As a result, our K9 program continues to thrive and successfully keep our city and officers safe.